The Super Locust LCT-S1E is a prototype battlemech currently being tested by Strata Institute of Science. The intention is to improve the combat effectiveness of the Locust by increasing the unit weight from 20 to 35 and utilising double heat sinks, endo steel internal structure and an XL engine. The unit has a second searchlight mounted to assist its role as a scout and particularly for operations in the lowlands of Strata.

Recent testing has lead to approval for further development (and increased budget) for the “Super Locust” or “Weta” as it is more commonly known, and the original standard armour has been removed in favor of Ferro-Fibrous armor, and a single jump jet fitted to grant the mech further versatility. This optimization does come at a cost, however, as with the new armor there was insufficient space to fit hand or lower arm actuators.

(1) Original/free searchlight for a battlemech is assumed located in the centre torso following the rules presented in Total Warfare. The listed searchlight is in addition to this. 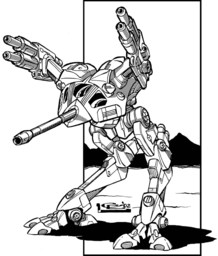