Vibro weapons are very effective against all types of armour.

Stunstick
The stunstick was originally developed for use by civilian peacekeeping authorities for crowd control or prisoner management. Inner Sphere police and other civilian authorities still frequently use stunsticks, which is how Mechwarriors most frequently encounter them. The stunstick is approximately the same size and weight as a small blackjack or billy club. When activated, however, it delivers a powerful neural impulse to exposed or lightly covered skin, generally rendering the target unconscious.
AP/BD 0E/4D
Range 1M
Shots 1PPS
Mass 200g
Does not add STR to damage

Vibroblade / Vibrodagger
The vibroblade or vibrodagger is a bulky version of a standard blade or dagger. When activated, it vibrates at an extremely high frequency, makine it a highly effective cutting tool. Common in civilian and military hands.
AP/BD 6M/2
Range 1M
Shots 1PPS
Mass 350g

Vibromace
The vibromace is a myth, sparked by a weapon used in a B-grade holo-movie. After that it became the standard ‘scary makeshift weapon of the big strong enemy’ in comics, TV shows and movies. The weapon is utterly ridiculous, and impossible to create in reality. In entertainment the vibro-mace will easily pass through obstacles like scenery and parked cars and yet barely scratch an action hero’s plot-armour.
AP/BD NA
Range NA
Shots NA
Mass NA
Ridiculously inaccurate and impractical 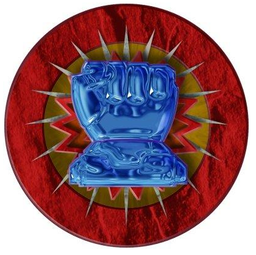