The Zephyrus class military airship is used on planet Strata as a battlemech carrier and mobile support base. To increase the strike-range of the carried battlemech lance, Exocoetidae Alpha Variant Transport VTOLs are used for rapid deployment and retrieval of the battlemechs, this allows the Zephyrus to strike while using the fog of the lowlands to remain concealed.

Carrying Capacity: Up to 250t cargo (external, by lift hoist) before speed is reduced, up to 800t total of additional (external) cargo.

The infantry forces are double-bunked by design. Allowing them to use some of the 11 free quarters is common practice, especially for long term assignments.

Operational Doctrine
The armour and armament of Anemoi class airships is deliberately kept light to deter airship commanders from committing the vessel to combat. Two primary operational doctrines are in place for the Zephyrus model of mech carrier airship.

First, with light or medium mechs, the airship will carry two Exocoetidae Aplha Variant Transport VTOL (one for a pair of mechs) and two combat VTOL to defend the airship, provide air support to the battlemechs, or other designs for other support functions. The lighter mechs can cover a wide area independently or with the assistance of the VTOLS while the base ship remains distant and preferably undetected. The airship will be defended by the remaining four VTOL, forming its Combat Air Patrol.

Second, with heavy or assault mechs, the airship must carry four Exocoetidae Aplha Variant Transport VTOL (one per mech) and can deploy the mechs remotely by VTOL or approach a mission area and deploy the mechs more directly. The airship will be defended by the remaining four VTOL, forming its Combat Air Patrol.

Notes:
1) The security platoon provides LRM fire to augment the airships defences and are equipped with standard weapons to provide security verses boarding actions.
2) The choice of infantry type will depend upon mission parameters but additional LRM infantry are strongly preferred. LRM infantry can augment the airships defences if needed, and can better use lowlands fog for cover and concealment due to the range of their support weapons, compared to SRMs or machine guns. 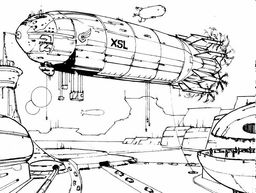