Beacon Pylons are used to mark landtrain routes through the midlands and lowlands of Strata.

Beacon Pylons are used to mark landtrain routes through the midlands and lowlands of Strata.

They are used to guide Travel between Argyre and Perdix and are used throughout the Old Frontier around Argyre and leading to the mining operations in the New Frontier.

There are abandoned landtrain routes with Beacon Pylon trails throughout the Lost Frontier to played-out mining outposts as well, though these are not regularly maintained like those along the main rout between Perdix and Argyre. These abandoned but active routes are the main cause of inexperienced landtrain teams becoming lost or misdirected during Travel between Argyre and Perdix.

The Beacon Pylons are self powered and adapted for inclement conditions of the lowlands. They transmit a locator signal that can be detected for up to 2km and are used to mark out the path. They also send the numbers for the next beacons in the network which is critical in areas where the beacon path leads around some hazard and shortcuts are dangerous. The most common and most embarrassing type of accident novice landtrain teams are prone to involves taking a shortcut into the fog-hidden terrain hazard that the beacon path was designed to lead them around. Some beacons are programmed to transmit hazard notification messages for nearby terrain such as crevices, or to upload the recommended path in more complicated sections of the route. In practice on well travelled routes most travellers head from beacon to beacon while following the tracks from previous passages, rather than relying upon the projected route data (when available) from the beacons.

Beacon Pylons log and store a record of passing landtrains ID numbers and the time they entered and left signal range of up to 2km. Normally this log of information is retrieved by maintenance crews on-site (pylon by pylon) every few months, and the official archive is updated.

Due to recent incidents of lost landtrains on the Argyre to Perdix route it has been suggested that the data be collected more frequently, to more rapidly detect a missing landtrain. The leading suggestion is to upgrade some landtrains to interrogate the beacons for data along the route, or to organise faster vehicles to collect the data daily.

Reprogramming or upgrading the beacons has also been suggested, since they are designed as passive and short-range devices and are not equipped to pro-actively alert in response to an unusual event such as of a landtrain leaving the route, crashing, or remaining in the beacon’s sensor zone an unusual length of time. Previously none of these functions were considered necessary.

The route in question, for Travel between Argyre and Perdix, is over 1000km mostly through the lowlands and is comprised of roughly 2500 beacon pylons along the route. For this reason the options not requiring upgrading of the pylons are strongly favoured by most residents of Argyre.

The beacon pylons can also be used to transmit messages along the chain of beacons with each acting as a reciever-transmitter to send the message along the network of beacons. This is the standard method for stranded travellers to alert the authorities to their situation using an interface-terminal at the base of the beacon pylon.

Beacon Pylons are typically placed every 500 to 600 meters in straight and simple sections of the path, reducing the interval to 300 meters in mildly complex sections and down to 180 meters in very complex or hazardous sections. In such situations the beacons would be fully supporting the drivers with GPS support, data on the surrounding terrain, a projected route, and so on. 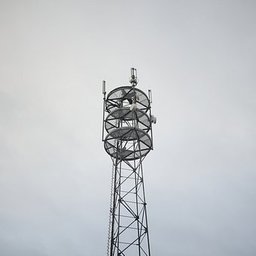