A violent and mentally unstable street punk young woman. A Sons of Brion agent captured while working in Argyre and under command of Silent Watchers agent Hedley.

Position:
Sons of Brion agent, caught while working undercover as a street thug working with the ‘roapers’ gang in Argyre. Suspected assassin.

Description:
Min has proven herself a fierce, ruthless, fearless and formidable combatant who favours unarmed combat and melee weapons over ranged combat. She is utterly dedicated to the Sons of Brion cause, more so than her own life, and this appears to be the reason she is a Sons of Brion agent rather than advancing to the higher Silent Watchers organisation. 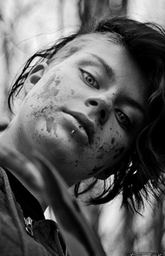