A.k.a "Flapjack", "The Tyche Terror" and "Jack Dubious"

The Dubois family were civil servants of the Draconis March government, displaced in 2858 during the Second Succession War when Robinson fell to the Combine during Myogi Kurita’s Marathon offensive. As refugees, they were resettled to the then-virgin world of Strata and spiraled down into a hardscrabble existence as subsistence farmers.

Within the last two generations, the family fortunes have improved along with their world’s. Jacques’ uncle Laurent owns a mid-sized forestry services company in Tyche. Jacques spent his youth working in a variety of roles within the family business. He would spend weeks in the wilderness on foot as a surveyor, operate Crosscut civilian forestry ’mechs, and maintain the Crosscuts and other heavy equipment.

Jacques did a mechanic apprenticeship within the company’s equipment yard, showing sufficient aptitude that his master (an ex-military tech) recommended his application to the local military academy. Due to personal friction with his uncle, Jacques was happy for the change of career and did well at the academy. He holds the rank of Corporal and has been assigned to Hellstrom’s Hellions to suppress banditry in Argyre.

His signature item is the double bit felling axe he carries whenever outdoors. His signature move as a ‘mech pilot is freakish shots to the opponent’s ammunition. 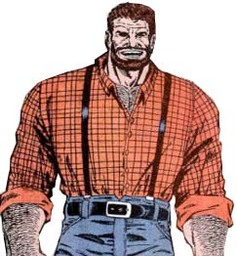